Trump by the numbers: The First 100 Days


A selection of his ‘achievements’ with some sources.
Read more »
Posted by No Time to stay calm at 19:23 No comments:

Trump’s Administration produces chaos even for the US military 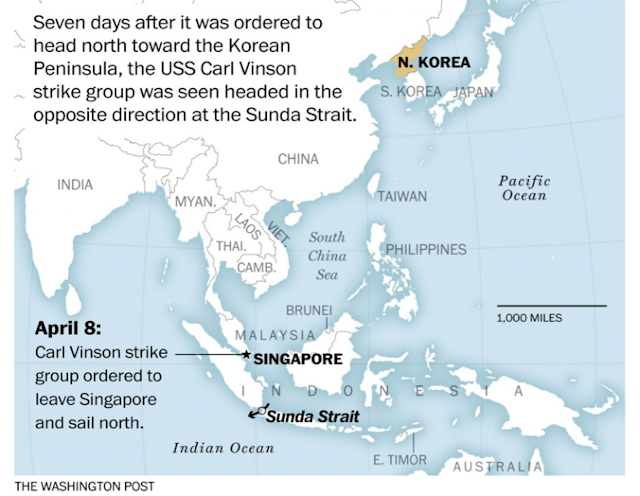 Remember 10 days ago when the US administration raised global anxieties (at least those following the news) because it claimed that Trump had ordered a carrier strike group to head towards North Korea in advance of that regime’s sabre-rattling missile tests?  Well it turns out the aircraft carrier USS Carl Vinson and its supporting ships were actually conducting exercises off the coast of Australia, a US defense official acknowledged today. Indeed it was actually traveling in the opposite direction — towards the Indian Ocean, not to the northwestern Pacific — as recently as four days ago.  Trump and his spokespeople thus either lied or were totally confused about the warships’ whereabouts.  Given the track record and general ignorance of Trump and his proxies, either likelihood seems possible; both are laughably ridiculous if the brinkmanship deployed by Trump in this episode wasn’t so frightening. 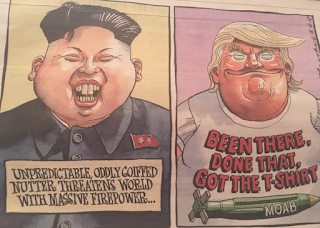 Trump has reversed his pre-election non-interventionism and seemingly embraced Republican foreign policy hawkishness.
Is this a good thing?  No.
Even before the missile strikes in Syria, Trump’s unknowledgeable, unpredictable and combative approach to foreign relations raised alarm amongst foreign policy experts about the possibility of armed conflict with Iran, China or North Korea.  After the Syria missile strikes and the unleashing of the unprecedented use of the MOAB weapon in Afghanistan, those worst fears are now nearer to being realized.


Trump, Syria and Distraction
Last night, Thursday 6 April, Trump flip-flopped on a major campaign plank and intervened directly in the Syrian civil-war quagmire by ordering a missile strike on the air base understood to be the launch point of the Syrian air force’s chemical weapon strike against its own civilian population earlier this week.  While ostensibly reacting to the most recent atrocity and war crime of Assad’s regime, I think there are good reasons to be sceptical about the purpose and ongoing commitment of Trump’s apparent turn of heart.  There is also reason to be extremely anxious about this impetuous and instinctual use of American military might by Trump.  In several ways, this action – even though it is directed at a murderous, criminal regime fully deserving of punitive treatment – confirms some of the worst fears expressed before the election about handing to a man like Trump the keys to the world’s most powerful arsenal.
Read more »
Posted by No Time to stay calm at 23:38 No comments: