And so the purges begin…


The Trump administration signals it is moving against opposition within the government bureaucracy
Today, resistance to Trump’s attempt to govern by degree began to meet resistance from within the US government itself.  First, this morning, members of the US State Department leaked news that they were preparing a ‘dissent memo’ on the Administration’s executive orders concerning foreign relations, and most particularly the intensely controversial ‘extreme vetting’ order.  Then this evening, Acting Attorney General, Sally Yates publicly announced that she would be instructing the Justice Department’s lawyers to not defend the President’s executive order from Friday that has caused such chaos at US airports, because of her fears that Trump’s order was not in fact legal.  In both cases, these government officials were not being especially partisan, but fulfilling the obligations of their jobs.  Its just been reported that Yates has just lost her job, and from statements made by Trump’s press secretary the hundreds of State Department officials who have signed the dissent memo have put their jobs at risk.

So what exactly is going on in Trump’s ‘Extreme Vetting’ measures?

So what exactly is going on in Trump’s ‘Extreme Vetting’ measures?
First, the sad ironies.  The executive order, entitled “Protecting the Nation From Terrorist Attacks by Foreign Nationals,” directs federal agencies to block the entry of Syrian refugees indefinitely, and suspends the U.S. Refugee Admissions Program (USRAP) for refugees from all countries for 120 days. The total number of refugees admitted in 2017 will be lowered from 110,000 to 50,000. The order also temporarily bans citizens of Syria, Iran, Iraq, Sudan, Yemen, Libya, and Somalia from entering the United States until a review of the visa and refugee vetting process occurs and a more stringent alternative is implemented.

And this is just the beginning....


The organizers of The Resisterhood found out yesterday that Trump filed the necessary paperwork to set up a campaign for re-election in 2020, FIVE HOURS after his inauguation.  To put this in context, Obama filed this paperwork for his 2012 re-election campaign in April 2011.  An incumbant doing this before the midterms is apparently unheard of.

Here is the letter, which is posted on the US Federal Election Commission pubic site. 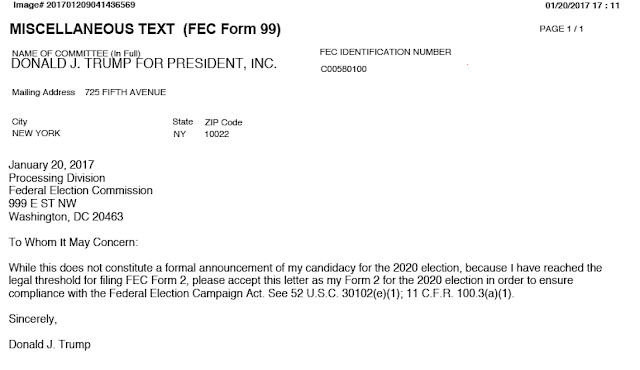 Beyond its arrogance and narcissism, this is actually a very significant development with rather dire implications.

As the Resisterhood explain, by establishing himself as a candidate already, Trump can curry favor with PACs, businesses, and other organizations as Trump the candidate, not Trump the president. And by doing so it means that different rules apply to how non-profit organizations can handle him.

For non-profits registered under IRS 501c3 rules cannot "campaign" against a registered candidate -- that is speak negatively in public about Trump -- or risk losing their nonprofit status.   Here is the rule in question: 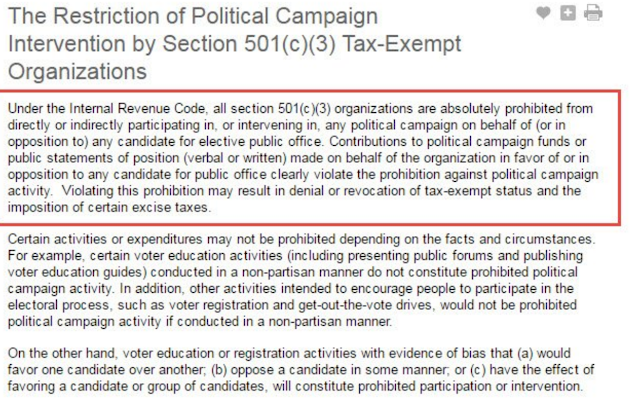 Just think about what this means for an organization like Planned Parenthood.....

It also further muddies the ethical swamp that is Trump's entangled business, political and government interests.

The bottom line is that it appears that Trump, or (more likely) Bannon and Jared Kushner, are already thinking about how to use every legal loop hole to silence dissent.

And while the furore over the 'Muslim Ban' kept everyone's attention, this happened...

Yesterday Trump reshuffled the US National Security Council (NSC) the main group advising the US President on national security and foreign affairs, downgrading the role of the military chiefs of staff and giving a regular seat to his chief strategist Steve Bannon.  Trump appointee, retired lieutenant-general Mike Flynn heads the body.

According to reporting by the BBC, the director of national intelligence and the joint chiefs will only attend when discussion is pertain to their areas. Bannon, it seems, will be a permanent presence. Under previous administrations, the director and joint chiefs attended all meetings of the NSC's inner circle, the principals' committee.

Trump also ordered a restructuring of the Homeland Security Council, and in two seperate orders:
These moves, especially the appointment of Steve Bannon, were criticized by Sen. John McCain on CBS's Face the Nation this morning.  McCain referred to the move as "radical" because it minimizes the role of the chairman of the Joint Chiefs of Staff.

As the Senate Armed Services chairman, McCain said it was concerning that Trump has centralized power around Bannon and that the  most important decision-maker on the National Security Council, Gen. Joseph Dunford, is now being shut out of critical meetings.

White House press secretary Sean Spicer chanelled Trump directly in his defence of the move today, saying that the new structure will "streamline" decision-making and praised Bannon as having a "tremendous understanding of the world and the geopolitical landscape that we have now."
Posted by No Time to stay calm at 16:32 No comments:

Trump by the numbers, the first week

Click here for a short video that provides a complete listing of all the measures put forward by the Trump Whitehouse this week.

Trump by the numbers, Day 7.

New Executive Orders: only 1, but a biggy. 'Extreme vetting' at the borders. A 90-day block on entry to the US from citizens from Iran, Iraq, Syria, Yemen, Sudan, Libya and Somalia. (It is unclear if this would apply to citizens of those countries on trips abroad who already have permission to live and work in the US.) It suspends the admission of all refugees to the US for a period of 120 days, and terminates all refugee admissions from Syria - indefinately. It caps the total number of all refugees entering the US in 2017 to 50,000 (less than half the previous year’s figure of 117,000), and gives priority to religious minorities (Christians predominantly). A further list of countries subject to 'extreme vetting' will be compiled -- although the countries from which all the 9/11 terrorists originated (Saudi Arabia, UAE, Egypt and Pakistan) are currently not on it....(and given Trump's known business ties to Saudia Arabia and UAE....?)


Classic Orwellian Moments: In addition to reports that Trump himself is using a private email account, Trump counselor Kellyanne Conway, White House press secretary Sean Spicer, chief strategist and senior counselor Stephen Bannon and senior adviser Jared Kushner — Trump's son-in-law — all have been using private -- rnchq.org -- email accounts while working in the Whitehouse, Newsweek reported Wednesday. Yet, according to a new poll by Public Policy Polling, supporters of President Donald Trump say he and staff should be allowed to have a private email server. "Forty-two percent of Trump voters think he should be allowed to have a private email server to just 39 percent who think he shouldn't be allowed to," according to a write-up of the poll.  This is now illegal: the Presidential and Federal Records Act Amendments of 2014 (H.R. 1233) was signed into law by President Barack Obama on November 26, 2014, in the wake of the furore over Hilary Clinton's email server and explicitly bans the use of private email servers for government use.

Substantial Revisionism: 1. No mention of Jews, whatsoever, in the Whitehouse statement on International Holocaust Remembrance Day (today). 2. Allowed British PM Theresa May to claim Trump was 100% behind NATO.

Attacks on the media: muted today -- joked in his press conference with Theresa May.

Trump by the numbers, Day 6.

Total Executive orders to date: 12. Lowlights of the most recent: Creating a weekly blacklist of crimes committed by "undocumented immigrants in sanctuary jurisdictions".

Today's substantial revisionism: claiming the cancellation of next week's meeting with the president of Mexico was mutual.


Classic Orwellian Moment: Claiming that somehow Mexico will still be paying for the wall through a 20% tax on imports -- which in reality means American taxpayers will pay for the wall, and then will also pay for higher prices for consumer goods from Mexico. Of course, Mexico will retaliate and levy their own tarifs on American goods which will hurt US exports -- but in Trumpspeak this will protect the border and create more American jobs.

Attacks on media: ongoing - and now include Stephen Banning telling the media today 'to just shut up'

Trump by the numbers, Day 5

Number of Tweets as POTUS: 57

Trump by the Numbers,  Day 4

Substantive revisionism: 1 (Complete overhaul of Whitehouse website, minutes after inauguration: information on civil rights, climate change, LGBT rights, healthcare, immigration, education and the “Iran Deal” all deleted. “America first energy plan” has replaced climate change as a priority, while “Bringing back jobs and growth” focuses on lowering taxes. Civil rights has been replaced with “Standing up with our law enforcement community” and emphasizes the “lawlessness” of illegal immigration and inner cities.

Number of tweets as POTUS: 37

Attacks on media: (already too many to count)