Who now is the hand of the king? 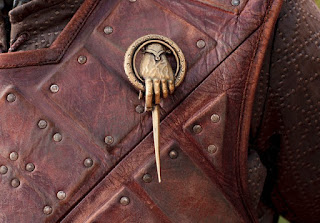 The infighting within Trump’s White House reached a crescendo this week, with the addition to the menagerie of mini-me-Trump Anthony Scaramucci and the subsequent and connected ousting of the buffoonish Sean Spicer and stalwart Republican insider Reince Priebus.

I think we should expect a ramping-up of accusations against Trump’s critics in the coming days.

Trump’s interview with the New York Times on Wednesday 19 July, and the subsequent reporting in the Washington Post on Trump’s querying of the extent of his own powers of pardon signal, I suspect, the start of new offensive on the part of the Trump White House against those tasked with both usual legal oversight of the US government and the extra-ordinary Russia investigation.

What do the latest Trump-Russia revelations actually amount to?

Last year Trump very publicly called on "Russia, if you're listening" to help him find Clinton's missing emails.  Over the past week two major stories have been reported that indicate there were more active, behind the scenes, efforts on the part of the Trump campaign to get damaging information on the Clinton campaign.  The Wall Street Journal  and now the New York Times have reported active Trump campaign contacts with Russian agents or intermediaries toward the goal of obtaining negative information about Clinton.  And Donald Trump Jr. has now publicly confirmed that the campaign communicated directly with a Russia foreign national connected with the Putin regime in the bid for that material damaging to their election opponents.  Why is this significant?  Simply, these are the first clear examples of the Trump team deliberately "colluding" with Russians in the 2016 election.

American experts have pointed to the legal problems a presidential candidate would face if they received “substantial assistance” from or were “aided and abetted” by a foreign national in an effort to influence an election.  Plenty of evidence has been accumulating on the public record of this happening in “plain sight” -- including Mr. Trump's own comments during the campaign.  These have been brushed off as rhetorical flourishes.  Now there is the first evidence of the intent and willingness to have direct Russian assistance, and the actions undertaken to obtain it.


The Wall Street Journal story outlined the activities of a Trump-campaign supporter, Peter W. Smith, who assembled a team dedicated to locating Clinton's deleted emails, and who put out the word that they were interested in what hackers could find.  Smith's contact with the Trump team was supposedly Mike Flynn.  We don't know whether Flynn had direct contact with Smith; Flynn isn't saying and Smith is now dead (note, not likely a conspiracy, he was in his 80s). The Trump campaign has not, however, denied Flynn's involvement, saying only that “if Flynn coordinated with [Smith] in any way, it would have been in his capacity as a private individual.”  Yet, Smith and one of his associates apparently indicated to others the belief that Flynn was their connection to the Trump campaign. This is all being investigated, no doubt.
Then this weekend the New York Times reported that Donald Trump Jr., along with Jared Kushner and Paul Manafort (Trump Campaign Chair at the time), met last June with Russian lawyer Natalia Veselnitskaya.  The latter is a person with close ties to the Kremlin, who for years has been advocating for repeal of the Magnitsky Act: an American law from 2012 that blacklists suspected Russian human rights abusers.  Putin was reportedly so angry at the law he retaliated by halting American adoptions of Russian children.  Veselnitskaya has been at the forefront of campaigning against the law ever since, including, attempts to discredit its namesake, Sergei L. Magnitsky, a lawyer and auditor who died in a Russian prison in 2009, in dubious and never fully explained circumstances, after exposing one of the biggest corruption scandals during Mr. Putin’s rule.  We also learned in a second story based on sources from within the Whitehouse itself that Trump Jr., took the meeting because he was promised that he would receive damaging information about Hillary Clinton.

Trump, Jr. has changed his story on this meeting at least twice (first denying it, then saying it was about something else), but he now acknowledges it was about getting dirt on Clinton but claims the meeting was disappointing because “It quickly became clear that she [the Russia lawyer] had no meaningful information.”  He now says her claim to have had this material as mere “pretext” for the meeting.  And more evidence is emerging that Trump Jr., and others, knew that the Russians were willing to help them.  Moreover, the President’s son is admitting that the campaign arranged the meeting solely to get information on Clinton.

Trump Jr claims in his defence that all campaigns look for dirt on their opponents (true enough), and that he did not know of Veselnitskaya's Russian connection (this should be treated as highly dubious - what campaign would send its top people to such a sensitive meeting without first finding out who they were meeting with?).  Trump Jr. claims when he invited Kushner and Manafort to join the meeting he did not know that Veselnitskaya was a Russian lawyer; nor did any of them seem to care. That strains credulity, but if there is any truth to it, ignorance of whom they were dealing with will likely be seen as “willful blindness” by those investigating the Trump team -- that won't help their legal position.
The Times reports that they got the information from “three advisers to the White House briefed on the meeting and two others with knowledge of it.” Those sources apparently talked after the release of the first story.  Advisors to the White House are not in the business of taking highly damaging stories and volunteering new information which makes them catastrophically more damaging.  The inference to be drawn here, it seems to me, is that the President’s allies were trying to get ahead of something much more damaging or get a first crack at shaping the public understanding of something much more damaging. We don’t know yet what drove them to volunteer such highly damaging information, but five of them did it, so it wasn’t a rogue whistleblower.

May, June and July 2016 are critical months in the Russia story.  A large amount of stuff of consequence happened just in July [see the timeline here]. There are already suggestions, as yet unproven, that a top Trump associate was offered caches of email in the months or weeks just prior to the first Wikileaks release on July 22nd, 2016.  This story sounds quite similar, or at least the opening gambit to such an offer.  We have a growing number of stories like these, each seemingly damning but which we are told are mere coincidences and misunderstandings with no connection to any of the other stories.  As the coincidences pile up, the credibility of claims they are just unconnected coincidences wears thinner and thinner.

All this new information adds considerably to the potential criminal violation of the federal law that prohibits “substantial assistance” to foreign nationals seeking to influence a federal election.  Donald Trump can’t very well sustain his position that in calling for the Russians to find the missing email, he was merely joking. His campaign was working behind closed doors to fulfill the objective that the candidate was “jokingly” about.  If confirmed and further developed in the Mueller investigation, these facts also bolster the campaign’s exposure to “aiding and abetting” liability for a campaign finance violation.

A question clearly raised by the new information is whether the Trump campaign’s public and private communications about the hacked emails constituted a request or suggestion that funds be spent to acquire the stolen emails. The candidate certainly requested this assistance in his public remarks. Now, in a meeting scheduled with a Russian national with ties to the Putin regime, the campaign made clear that it was actively interested in having this kind of information.  Press reporting suggests that a) the campaign was interested in the emails, because the candidate had said so, and supporters like Smith was engaged in a concerted effort to find them; and b) both the campaign and Smith were dealing with Russian nationals in the search for negative information on Clinton.

It would hardly be unreasonable for the Russians to infer that the campaign was very much in the market for this information.  By suggesting that she had such information, Veselnitskaya was able obtain an audience with intimate associates of the candidate.  The  Russians could not mistake the intensity of the campaign’s interest.  The very scheduling of the meeting–and the status of the attendees–was sufficient to get the campaign’s point across about what it highly valued and was prepared to take from a foreign source.  And if they had any doubt, it would have been resolved by the President’s public call, six weeks later, for the Russians, “if you’re listening,” to find the emails.

We still don't have the direct connections necessary to judge if Trump and his campaign committed campaign finance violations in soliciting and receiving support from Russia, and assisting the Russians in their plan to influence the 2016 presidential election. But there is now little doubt that there is such a case to be investigated.

What is becoming increasingly clear is that Mr. Trump and his campaign were open to whatever help the Russians would provide: they made that clear to the Russians, and took specific actions to invite and receive this foreign national assistance.  In response to the latest disclosure of Russian contacts, the campaign’s defense seems to be that it never checked whether the people from whom they were soliciting stolen emails and other negative information were Russians, much less connected to the Kremlin.  That may beggar belief; some may even find the claim perversely amusing.  But under campaign finance law, it is no joke, its a crime.


BUT, just as we seem to be getting somewhere...


MSNBC anchor Rachel Maddow has raised the alarm that credible news outlets may be getting sent fake documents on the Russia investigation from sources trying to scuttle media credibility on the issue.  After being sent doctored “Top Secret” NSA documents claiming coordination between a named member of the Trump campaign and Russia, Maddow noted a possible link to recent sourcing problems with stories at CNN and Vice both led to their retraction and in one instance the resignation of several journalists.

Clearly there will be more smoke ahead.